When Life Gives You.. a LOT of Oranges

A lovely friend gave us a gift.  A 30 pound box of oranges from Florida, delivered by truck to Stratford.  They were delicious!  However, that is a lot of oranges for us to eat, even if they are fabulous.

We were reminded of this clip from the 1990s sit-com, Everybody Loves Raymond (apologies for the poor video).

Since we had been on a bit of a jam- and jelly-making kick, we thought we could put some of the excess citrus to good use in some marmalade.  Typically, marmalade is made with Seville oranges, which are quite tart and have that characteristic bitterness that marmalade aficionados love.  What we had were Navel oranges – very sweet and juicy – and so we decided to offset with the addition of some limes and lemons.

Making marmalade something like jam-making, but there are some differences as well, as the following illustrates.

First, the fruit is washed and scrubbed well.  As both the skin and the juice goes into the product, any dirt or residue needs to be removed.  Some fruit growers apply an “edible wax” to the citrus to give it a showroom shine in the supermarket.  We’d rather not have that in our marmalade, edible or not. 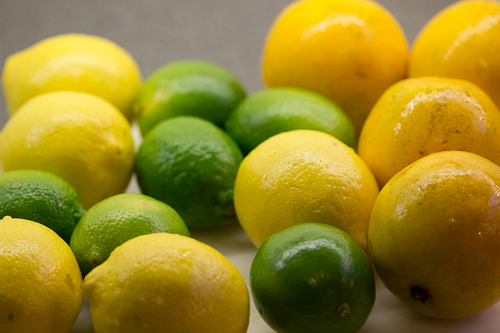 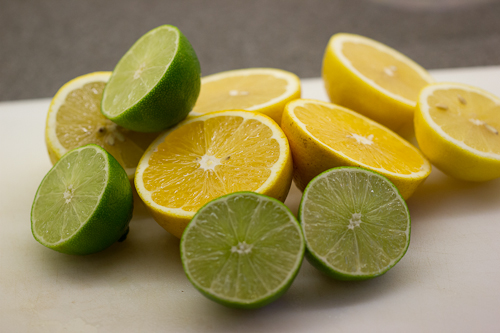 The fruit is squeezed, and the juice reserved. 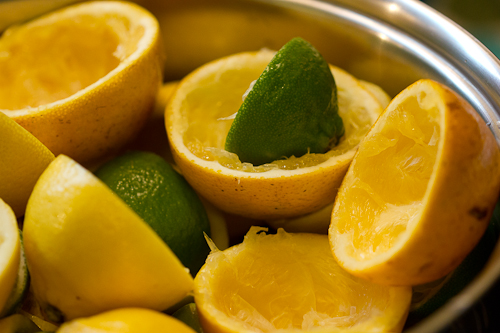 The bitter pith (the white membranes) as well as the seeds are scraped out.  While their texture isn’t appealing in the finished spread, they do contain natural pectin, and flavour that helps thicken the marmalade.  Pith and seeds go into a muslin bag, so that they can add to the concoction, but then be easily removed at the end of the process. 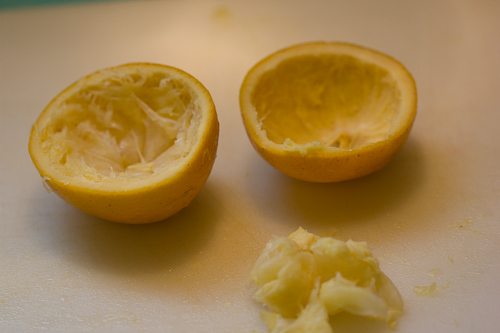 The peels get boiled in plain water to soften, without the juice, but with the bag of pith.  The boiling process is important, in order to soften the zest.  Once sugar is added, the peels will not get any softer.  Then, the peels are sliced into smaller pieces or strips.  Again, tastes vary – some fans love thin strips of the peel, whereas others like it thick-cut.  We went for a happy medium.  You can see the muslin bag at the bottom left, happily simmering away. 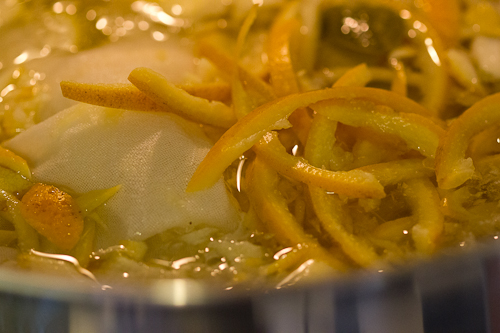 Sugar is warmed in the oven at low temperature.  Apparently (maybe urban legend) this helps prevent the sugar from recrystallizing in the marmalade when it cools.  It does also help prevent the temperature from dropping too much when it is added to the hot liquid.  Juices are added back, and mixture brought to a vigorous boil.  This drives off some of the water in the mixture, and activates the pectin with the sugar. 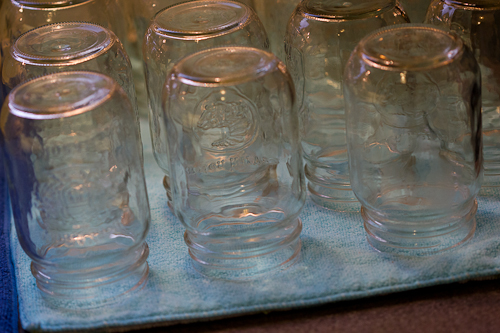 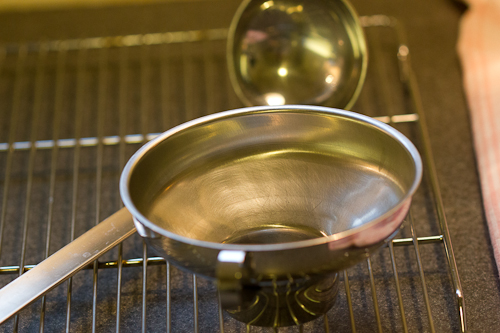 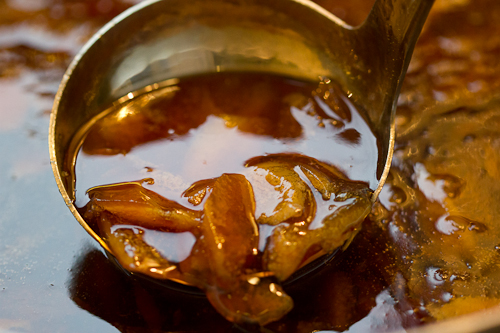 Target temperature is about 220-222F.  We like using our instant-read for this kind of project. 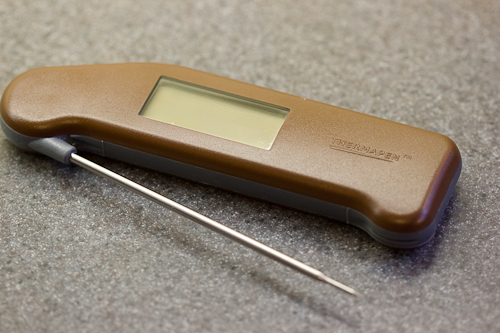 The most reliable way to make sure the texture will be right is through the “skin test.”  Put a spoonful of the jam on a cool plate and let sit in the freezer for a few minutes.  If it makes a wrinkly skin when pushed with a finger, the batch is done. 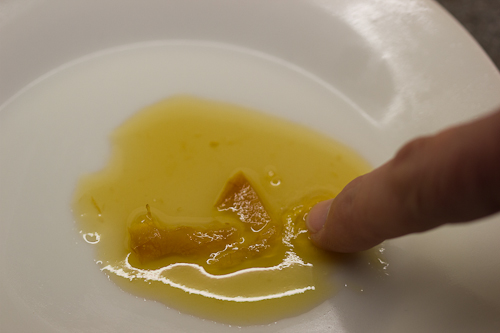 The monster cauldron for water processing.  This is actually a pressure-canner (hence all the valves and screws) but is used as a regular canner for this application. 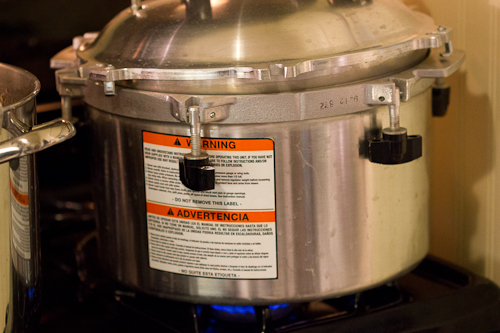 Boiling hot jam allowed to cool for a few minutes, and then laddled into hot jars. 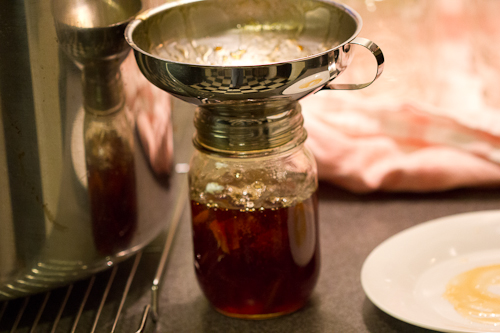 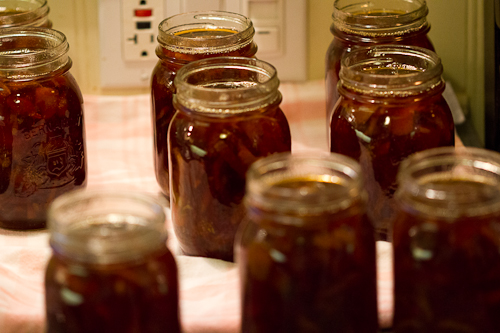 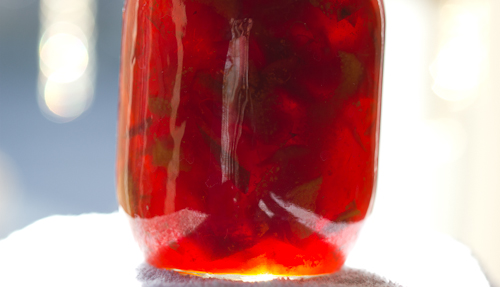 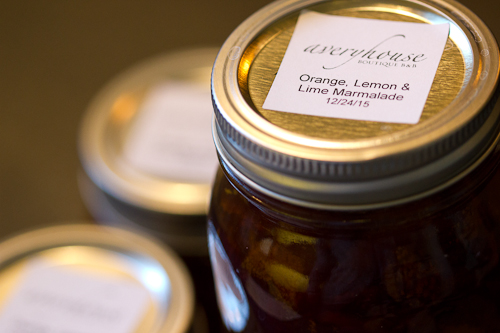 The verdict: pretty sweet for a marmalade, and lacking the characteristic bitter edge, despite the addition of lemon and lime.  However, still quite tasty, and will definitely offer to guests.  Looking forward to when Sevilles come into season in a month or so!

Feel free to add a comment or question below.