The next few blog entries we'll be sharing some different "Research and Development" projects we're undertaking this winter in order to bring something new to our breakfast for the 2016 season.  In today's entry, we take on The Cronut!

From our very first season, our homemade croissants have been a pretty consistent feature at the breakfast table a few times a week – in either classic form, or the more indulgent chocolate kind.

However, for many years we’ve been intrigued by the phenomenal success of The Cronut™.  For those of you who missed all the buzz, a cronut (no more annoying TMs for the balance of this entry) is generally credited to be the creation of Dominque Ansel, French pastry chef, at his Bakery in New York.  It is a hybrid between a croissant (with its traditional layering of dough and butter to produce the characteristic flakey, crispy texture) and a doughnut, as it is fried, filled and iced.

Apparently, the launch of the product took New York by storm, with customers lining up hours in advance of The Bakery opening each morning, and only a limited quantity of cronuts to be had.  Lots of media attention followed, along with competing claims from other chefs that they had created a similar product earlier, under other fun names like “dosants” or “doughssants” or “the Big O.”

The Wikipedia entry on cronuts itself is an interesting read.

We wondered if a cronut deserved all the hype, and, if so, should it be part of our breakfast pastry rotation?

Chef Ansel, who has been a staunch defender of his creation (including that annoying TM mentioned earlier) kept the recipe and procedure a closely-guarded secret for many years.  However, in 2014, he published a cookbook, in which he revealed the mystery in a “home cook” format.  He defended the reversal in his position from secrecy to publicity, since he felt “no home cook is going to go through the three day process.”  Well, we were crazy enough to take on the challenge!  In reality, it is not that difficult, and the procedure is very similar to croissants, of course. 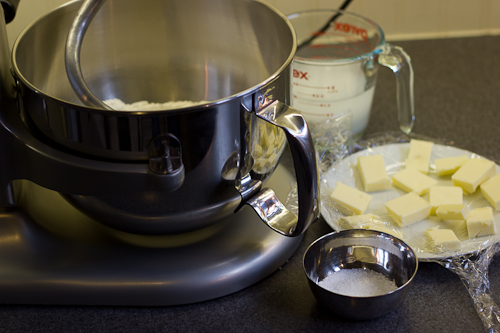 Mixed with the dough hook just until a loose dough forms, and not further.  The gluten, which gives all breads their structure, will be developed during the repeated rolling and folding steps, versus through kneading that s employed in a typical dough. 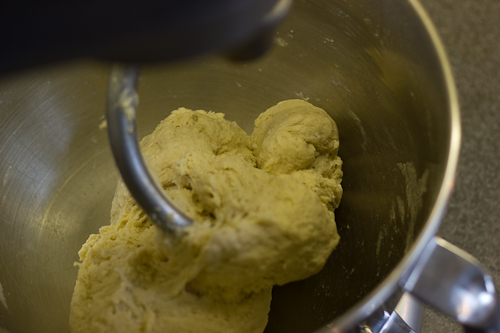 In all laminated doughs (i.e. pastries that are layers of dough and butter), the more accurate one can be with the shaping the better.  An easy trick is to draw out the desired sizes on parchment paper (flip it over so the pen marks don’t touch the dough).  Here, one sheet of parchment has the dough size mapped out; the other sheet is for the butter block.  Using a rolling pin to end up with a square is one part of the process that takes some practice! 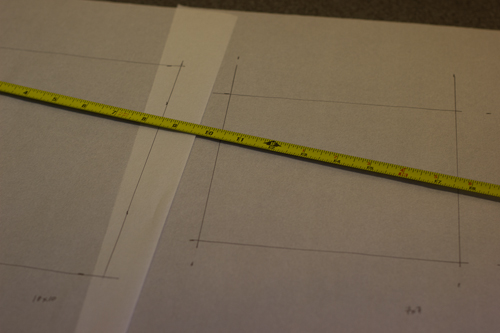 The butter block shaped into its square. 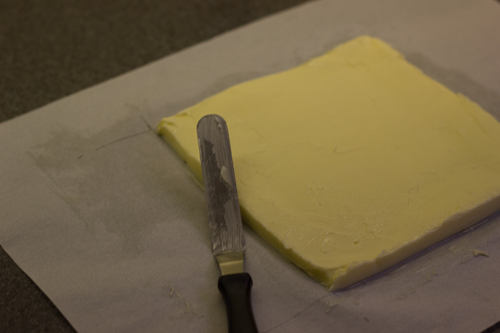 Dough and butter taking a nap in fridge to cool down.  If the butter and dough are not both chilled, the butter will melt into the dough, instead of staying in distinct layers. 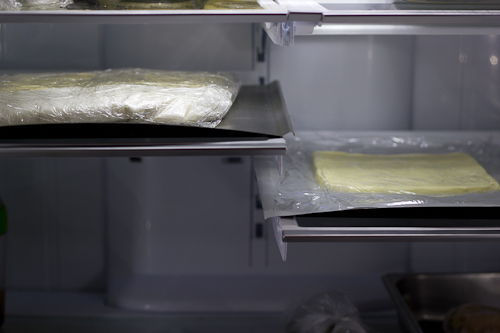 Butter block in place on the dough, in a “diamond” orientation.  The dough is then folded up and over the butter, sealing it inside.  The dough is then repeated rolled out and folded, so one ends up with many, many very thin layers of butter in between dough.  A rest in the fridge is needed in between each folding process. 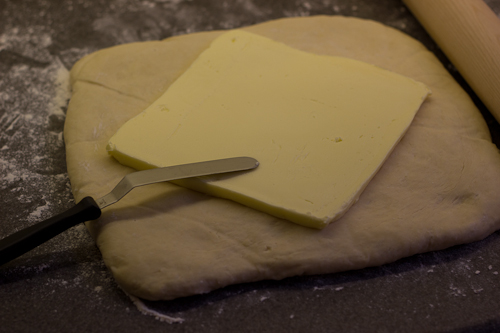 Just before the final rollout.  Dough/butter shaped back into a 10” square. 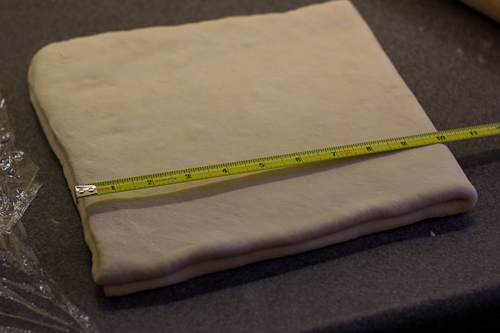 Traditional doughnut shape (and holes!) being punched out. 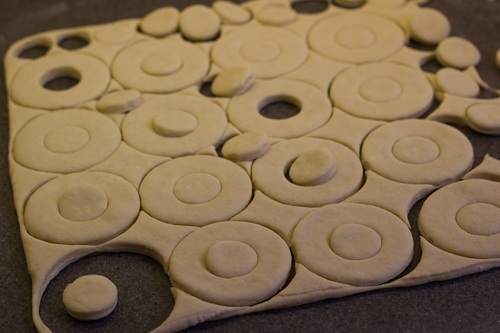 Lined up on sheet pans for the final rise. 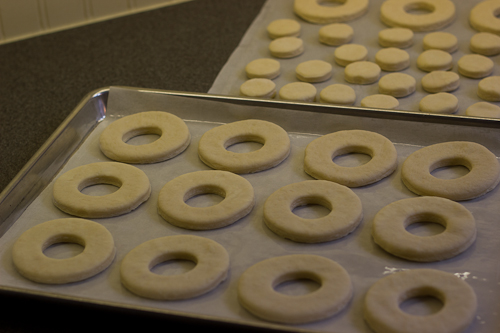 After rising, before cooking.  You can see the layers of dough separated by butter.  When exposed to heat, the water in the butter will convert to steam, puffing up the dough (along with the yeast) and the butter will melt into the dough, leaving spaces in-between.  Hence, the flakey nature of croissants. 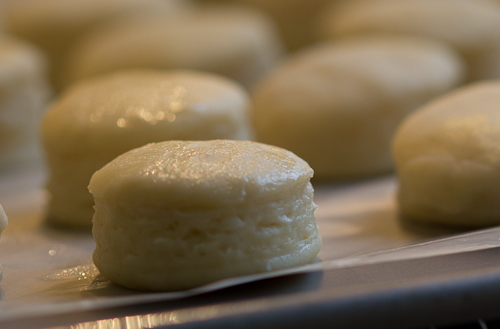 Just out of the hot oil.  Crispy and golden! 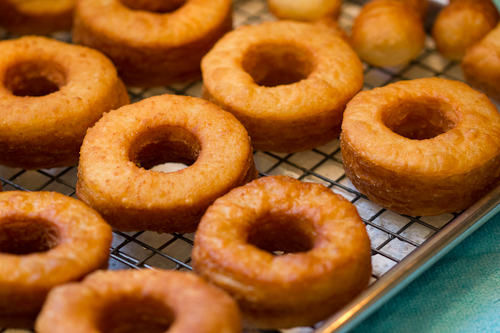 A simple glaze of icing sugar, vanilla and milk. 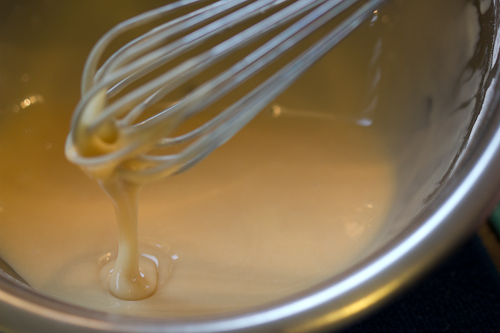 Brushing on the glaze. 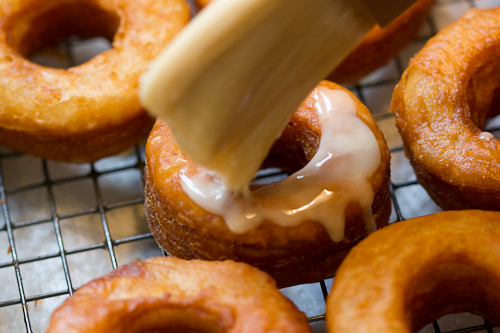 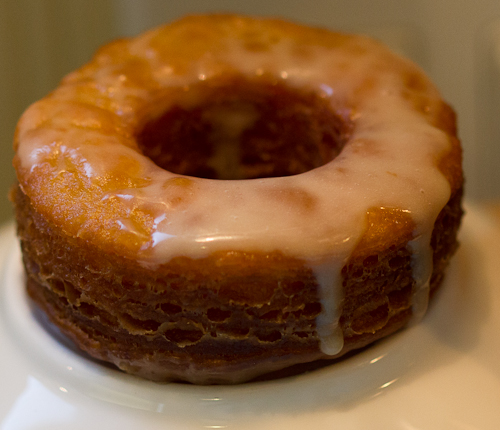 A cut-away, showing the layers and layers inside. 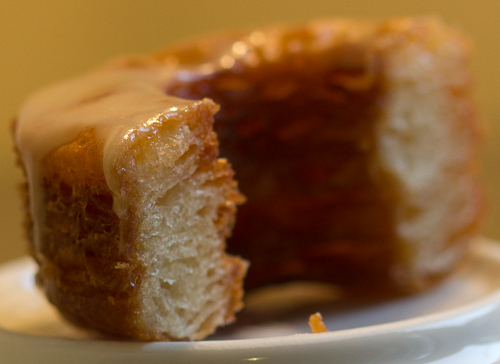 The verdict?  This was a pretty amazing pastry.  We found that the texture was the most remarkable thing about it.  Intensely crunchy and flakey.  The flavour was pretty good.  A “classic cronut” also has a cream filling inside, which we skipped for this experiment.  We think a flavourful filling, perhaps a homemade jam or a maple/cream filling would go nicely.

Please feel free to leave a comment or question below.

Those look incredible. You are making me SOOOooo hungry!!