Reviving Summer... in a Jar

Here in Southwestern Ontario, we certainly get to experience all four seasons of the year.   That means that sourcing ingredients locally – notably fresh fruit – entails acting quickly when the right window comes along.  That’s why we like our local Farmer’s Market so much.  Every Saturday morning, from late May through early October, after breakfast has been served and dishes tidied, John heads out to the Market to see what is at its peak that week.  The rhubarb of May gradually gives way to the first delicious strawberries of late June.  Then the onslaught of raspberries, blueberries and cherries in August… and peaches!  Then plums, apricots, and finally, the warning bell that the flood will soon be waning: pears. 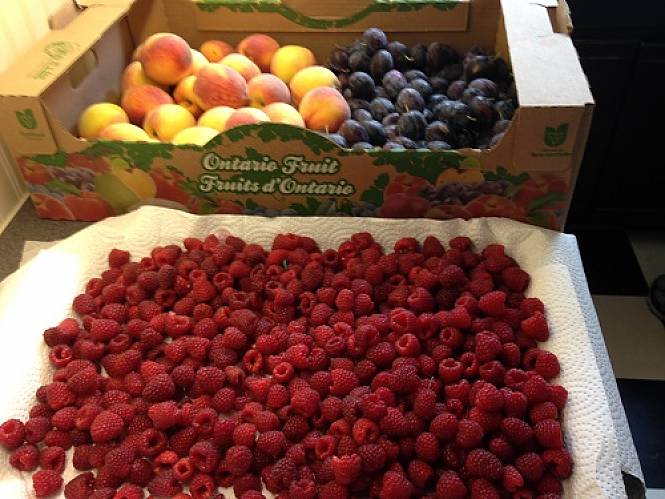 This year, we took a different approach, buying enough fresh fruit for the next several days’ breakfast each Saturday, but also getting a little extra on each trip, which we “put up” to stockpile in the freezer.  If the fruit is frozen properly – prepped, set out on sheet pans, frozen quickly, and then vacuum sealed – it holds remarkably well.  And, even after freezing, local produce has a much better flavour than fruit shipped thousands of miles out-of-season. 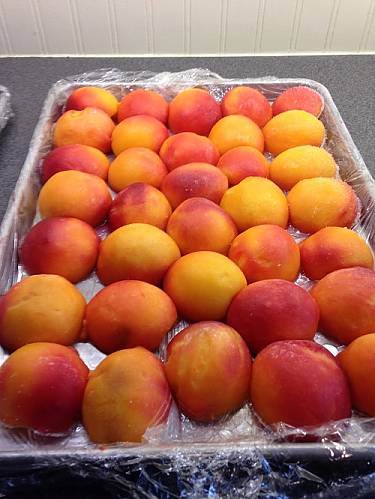 Of course, the texture of frozen fruit is not the same as fresh, and so it is best used in cooked applications.   It was delightful to serve a strawberry-rhubarb cobbler on a chilly October morning towards the end of the 2015 Festival season.

But what we’re really excited about is a new addition to our breakfast menu for 2016 – homemade jams and jellies.  John has done a lot of canning in the past, but until now hasn’t had the opportunity to make enough quantity for guests.  That’s changing!

For many years, he has been a fan of a well-known Alsatian artisanal jam-maker, Christine Ferber.  She is a remarkable woman, who you can read about here and here.  Not only is her reputation and commitment to local, quality ingredients very much aligned with our own philosophy; in addition, the obstacles she has overcome during her career are a further testament to her character.  She’s earned the title in her native France of la fée des confitures (the "jam fairy").

John has several of her books, and is especially fond of Mes Confitures.  Just reading about the innovative and unconventional flavour pairings that Ms. Ferber creates is pretty inspiring.  Most important, however, is the fundamental technique she shares for jam-making.

Typically, jam is made by combining fresh fruit, a ton of sugar, and packaged pectin in powdered or liquid form.  Then, the mix is boiled heavily to evaporate water and activate the pectin-sugar combination to thicken the jam.   There are a few drawbacks to this traditional approach: first, the extended boiling of the fruit removes much of its fresh flavour and colour, resulting in a muddy appearance and lack of brightness in taste.  Second, the amount of sugar needed to activate the commercial pectin is quite high, so jams made this way are really sweet, but not fruity, with all the acidity muted.

Ms. Ferber’s approach is a little different, and requires a bit more work, but the results are worth it.  The fresh (or frozen) fruit is gently warmed with sugar, just to dissolve the sugar crystals.  Then, the mixture is covered and refrigerated overnight.  During this rest, the sugar draws the juice (mostly water) out of the fruit.  Next day, the fruit is strained.  The resulting sweetened juice is then boiled (without the fruit) to evaporate the water.  Homemade pectin (which we derived from local green apples, before they ripened, and so were rich in the pectin) is added at the last minute, in much smaller quantities than is typical.  Finally, the fruit is added back to the much-reduced juice and brought up to a brief boil.  Better texture and flavour, without the cloying sweetness of commercial jam.  Of course, starting with local fruit is critical as well.  Then, into sterilized canning jars, a hot water canning bath, and done! 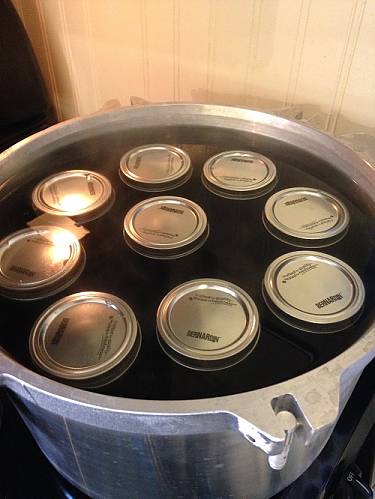 We’ve done up five different flavors so far: Apple Jelly, using a few different local varietals, including beautiful Paula Reds which we found at a lovely grove about 30km away - adds a rosy glow to the finished product, paired with some ancient unknown variety from a 100-year+ old tree here in town. 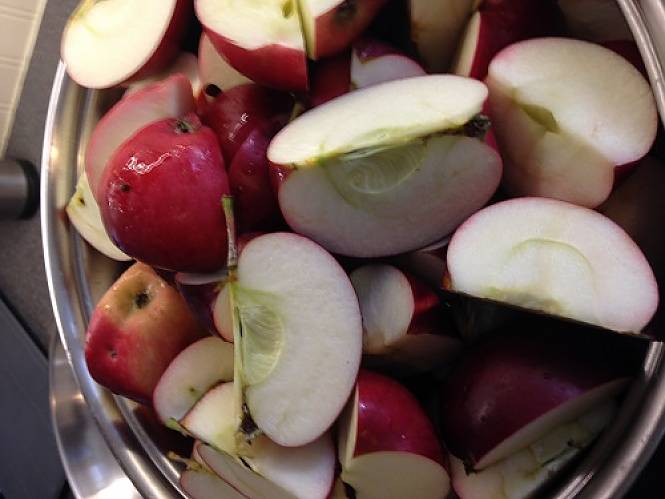 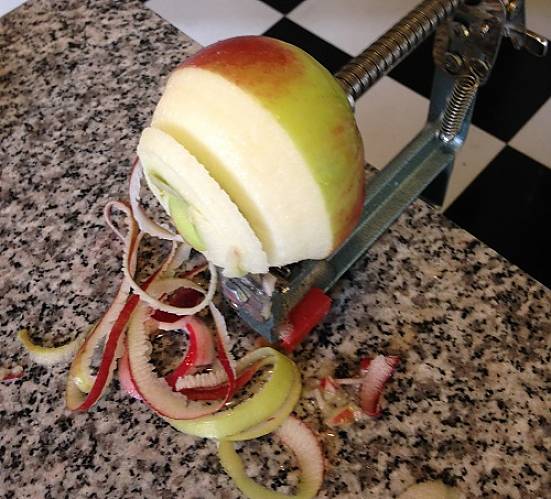 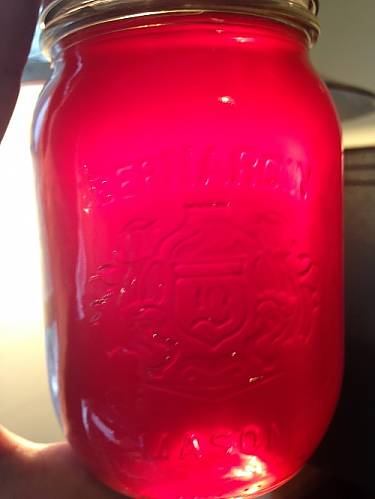 Taking advantage of the abundance of apples, we also did a decadent Apple Butter, thick and rich, with hints of warming cinnamon.  Peaches from Niagara paired beautifully with Vanilla Bean in a sticky-sweet chunky jam.  Purple plums made a really delicious jam, with a tangy pucker to it.  Rhubarb (from right here in the neighbourhood) with Crystalized Ginger – nice bite from the ginger.  And a combination of sweet Bing and sour Morello-type cherries, with a hit of Amaretto (the almond flavour of the liqueur goes nicely with cherries, as the nut and fruit are closely related). 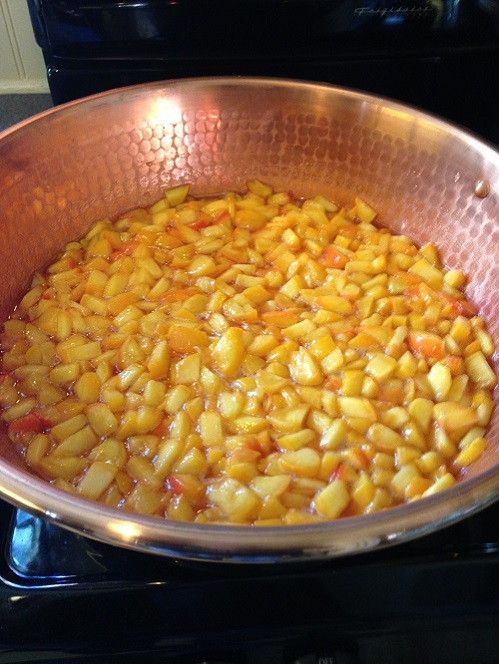 We’re pretty pleased with our “pantry-loading” efforts to-date.  On a chilly winter morning, pulling jars of homemade jam from the hot-water bath is warming – physically and emotionally.  We think these new additions to the menu will go nicely with our homemade croissants! 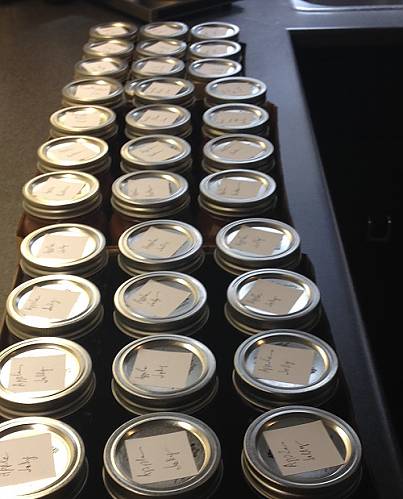 Wow, that jelly is so clear!

What a joy to find such clear thginikn. Thanks for posting!