Earlier I wrote about some experiments to try to get croissants the way I wanted them.  Well, serving them again tomorrow, and am going to try yet a different proofing/rising technique.  Will post on that later.

However, a couple of days ago, I used the same basic croissant dough, but rolled it around some really intense chocolate I got from the folks at Chocolate Barr's here in town.  The owners, Derek and Jacqueline, were nice enough to form the chocolate (70% cocoa, which is very dark, rich and a little bitter) into a traditional baton, or stick, shape, which is perfect for tucking inside.  By the way, their retail store on Ontario Street is definitely worth checking out.  Unbelievable range of delicious goodies to choose from.

In my earlier attempts, I had been worried about the chocolate melting and running out, but it seems that as the dough rises, it forms a nice seal, and there were no unfortunate "leakage" events.

Technically, I guess these really aren't croissants, since they aren't in the classic crescent shape.  I understand the proper name would be pain au chocolat.  Sounds a little pompous to me, so I'll stick with chocolate croissants.

The following shows the proofed, raw dough, brushed with egg wash (to make the surface shiny and golden brown); the finished baked goodie; and finally, showing off the great flakey texture, and the treasure within. 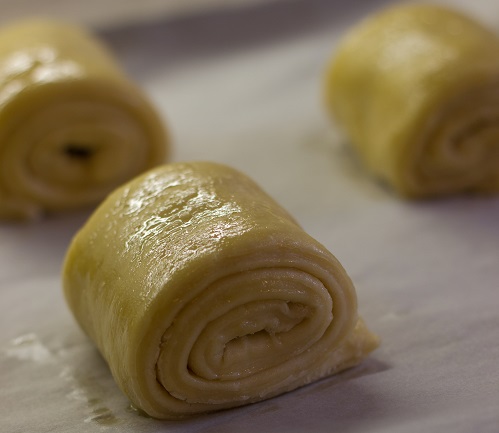 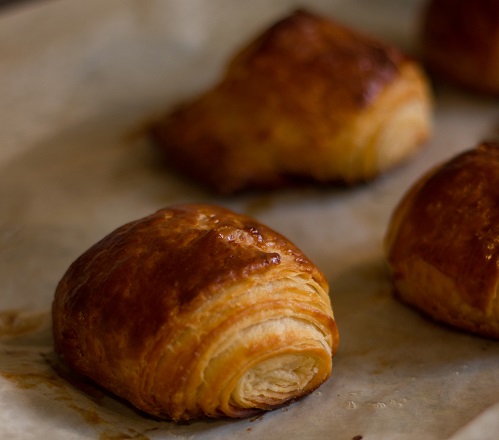 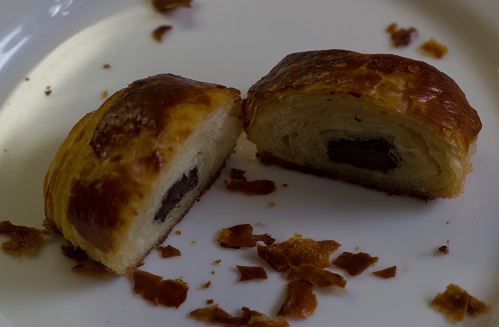