I realize that I tend to do mostly savoury breakfasts, as that's what I personally enjoy.  Of course, the fresh fruit is sweet, and so is the baking, but the entrees I make most often aren't; quiche, frittata, hash.

However, I've noticed that the plates I put down to the most "ahhhs" and "ohhhs" is this combination.  Crème Brûlée French Toast, which I usually serve with local Perth County Sausage from here.

A little about the sausage... the meat comes from heritage breed pigs, usually Tamworth, and so the flavour is truly remarkable.  This isn't a commodity pork product.  They are raised on pasture, over in Sebringville, which is all of 8.2 km to the northwest of Stratford.  Heritage, local, pasture-raised.  The trifecta of pork!  We had a "whole house party" (i.e. a group that takes all six rooms) many of whom love the local pork.  One of the guests said she was a charter member of the PPLA.  I said I would need to google it, until she explained: "Perth Pork Lovers Association."  I like it!  We should start such an organization.

The French Toast has less of a "food romance" story, but still is pretty darn good.  Croissants soaked in an eggy-milk bath, layered on a brown sugar and maple syrup "brûlée".  A night in the fridge to allow the bread to absorb the custard.  Bake, rest, flip and slice, topped with powdered sugar and some berries.  True, I don't get out the blowtorch to caramelize, but it still turns out pretty well. 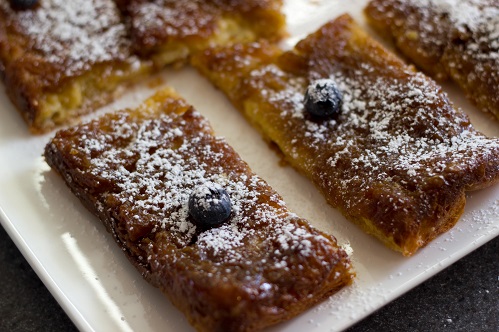 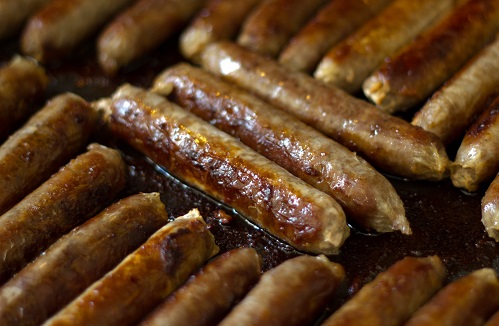